Toledo, Ohio: Black Frog Brewing… Why that is a Big Deal for Craft Beer!

In a quaint garage on a quiet street in a beautiful and serene subdivision on the outskirts of Toledo, Ohio, inconspicuously lies the home of Toledo’s newest craft brewery. This is no ordinary brewery, however. This is the home of the first minority-operated brewery in the city – and quite possibly the state. On Friday the 13th, we were fortunate enough to sit down and enjoy a beer with Toledo’s newest craft brewer; Chris Harris of Black Frog Brewery.

For better or for worse (you can be the judge), one of the defining features of Black Frog Brewery, aside from the fantastic beers they brew, is the fact that Black Frog will be the first minority owned & operated craft brewery in Toledo – and quite possibly the entire state of Ohio. Chris Harris, owner of Black Frog, will immediately be placed into the extremely exclusive group of minorities and people of color who own, operate and brew beer on a professional level. 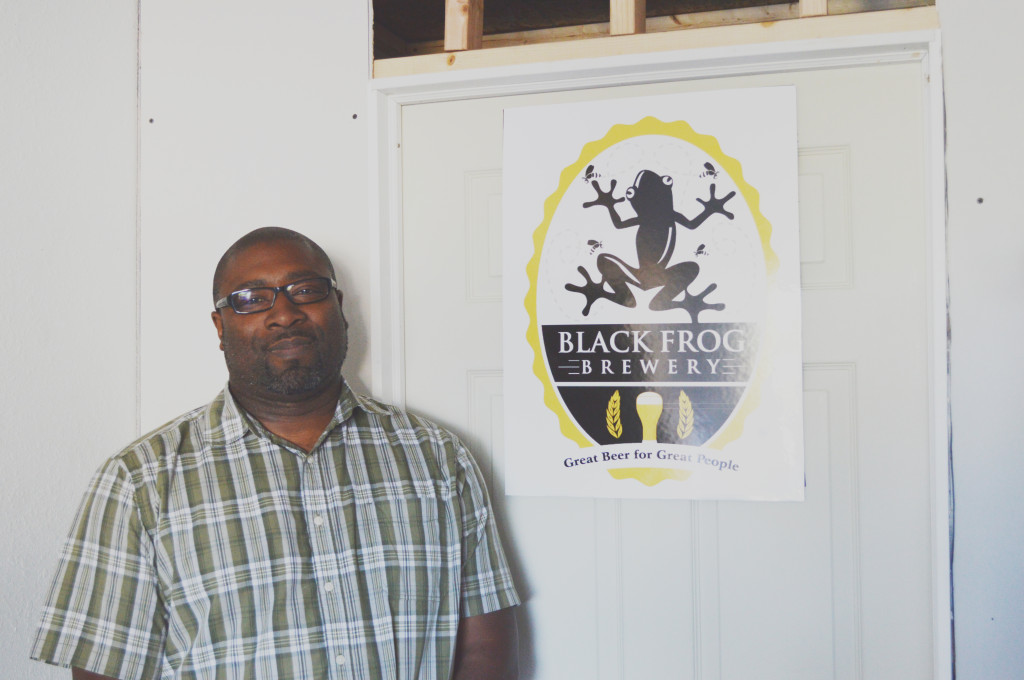 Chris Harris,a veteran of the United States Armed Forces, is truly the American Dream for so many home brewers. His beginnings into the art and craft of brewing beer were truly humble. Chris began his brewing journey on the user-friendly Mr. Beer machine. 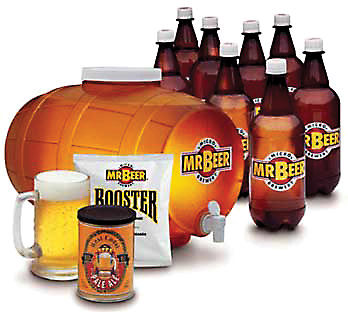 The moment his taste buds encountered his homemade creation, he was hooked. He instantly started upgrading his system and began brewing every chance he could; experimenting and tinkering with recipes all the while. Co-workers began sampling his beer and requesting more and more of it; so much that he began wondering if he could translate his passion of home brewing into a legitimate profession. As we sat with Chris, he shared some of his brews with us – his very special cream ale – which was quite delicious on a beautiful summer evening. Harris just recently took the plunge; filing paperwork, buying a brand new Blichmann System – 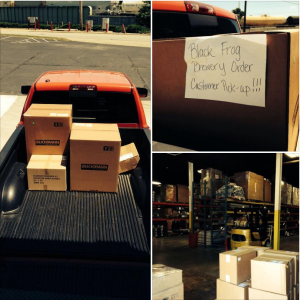 – and most importantly; hand-constructing his nano-brewery with the help of his fatherinside of his residential garage in quiet Holland, Ohio (on the outskirts of Toledo). Chris Harris just recently posted the following update to his Facebook page: 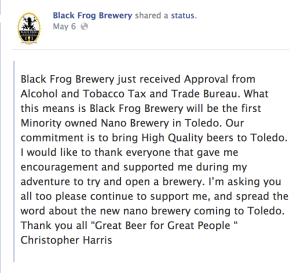 We talked at length about the importance of his status as a minority entering the world of craft beer. His minority status is in part the foundation of his Brewery’s name – Black Frog. At one point in our conversation, Chris Harris turned the interview tables on me and said “Let me ask YOU – Why do you think I named my company Black Frog?” I sort of sheepishly and nervously answered “Well, Toledo is the Black Swamp….we are called Frog Town…and…well….you’re black…” We all shared a laugh and he excitedly confirmed my hypothesis. He wanted to integrate all of the local culture and history of Toledo with his minority status in an attempt to create an all-encompassing company – which I thought was was a great homage to both the city and his identity. You will notice on the Black Frog Brewery logo that there are honey bees in addition to the frog. Another interesting twist to make Black Frog Brewery unique is that every recipe (Chris Harris emphasized ‘EVERY’) will integrate honey! That is sure to be a sweet spin on his brews! (Sorry, I had to.)

It is undebatable that craft beer, for whatever reason, is dominated by white males. In fact, Chris and I discussed a previous article I wrote concerning WHO is the Craft Beer Drinker and why he thinks the environment in craft beer is the way that it is. We also discussed how NPR wrote a fantastic piece on the topic, which highlighted the fact that there are only a handful of people of color who are professionally involved in craft beer. Michael Ferguson of BJ’s Restaurants, Andres Araya of 5 Rabbit in Chicago, Omar Ansari of Surly, and just a few more round up the minorities that represent professional craft beer. I find that so striking and so critically important to discuss, and Chris Harris had some fantastic insight on the matter. He carefully and respectfully postulated that the reasons for the lack of minority involvement in craft beer may be a lack of knowledge of craft beer. We acknowledged that African Americans do indeed enjoy beer, but many African Americans (especially those living within inner-city areas) quite literally do not have access to craft beer. Most carry-outs that serve the inner city do not stock their shelves with craft brews, and that craft beer is not really targeted or marketed to the inner-city population. Chris also acknowledged the socio-economic factors that could potentially distance minorities from craft beer. Craft beer sells at a higher price-point than many other beers, and that many families and individuals of color (again, especially in inner-city communities) simply do not have the monetary access to higher quality beer. We asked if he had any unique strategies to market inner-city populations. While he did have some interesting ideas (farmer’s markets, festivals, inner-city bars, etc) we had a laughable moment when Chris jokingly exclaimed that just because he is a minority does not mean he will be brewing malt liquor and distributing in 40 ounce bottles.

Some beer drinkers state “Beer is Beer, everyone can enjoy it”. While true, I feel that statement is ignoring the issue at hand. What is it about craft beer that is so ethnically homogenous and so (assumptious-ly) unintentionally exclusive to white males? If you have a response to this, please leave a comment below.

One of the best sentiments Chris Harris shared with us was the opportunity he has as an African American brewer to reach an entire new audience of beer drinkers and bring them into the craft beer community. He feels that the craft beer scene at large will benefit from inviting new types of people to the bar, and that when the environment becomes more diverse, everybody wins from a business and consumer standpoint.

Though Chris Harris and Black Frog Brewery are still in the early planning stages – and he has an incredibly busy Summer ahead of him – I truly feel that he has a great chance to be a major influence in not only the Toledo craft beer scene, but the craft beer scene throughout America.