I have to tell you all, it’s pretty cool being a writer for Pints, Forks & Friends.  I get to meet a lot of great people, learn a lot about the craft beer industry, and try a lot of excellent craft beer!!  I also get to embark on a lot of road trips.  I like road trips!!  This past weekend, I went on yet another, great road trip, with a good buddy to Millersburg Brewery.  Road trips are always better when someone goes with you.  I don’t know about you, but if you know anything about Millersburg, Ohio, craft beer isn’t the first thing that comes to mind.  We were in the heart of Amish country, where horse and buggies are as common as cars, the restaurants are incredible, and hard work is the staple.  I got to experience some of Millersburg Brewery finest brews at the Winter Warmer, so I had to come down and check it out!! 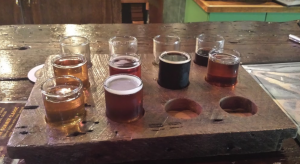 The brewery sits in the heart of Millersburg on East Jackson Street.  It’s within walking distance of the Millersburg Hotel.  This is great if you are planning on making it a weekend getaway.   As soon as you walk in, you know that you are in for a treat.  The décor is awesome.  It just has a rustic feel with a lot of wood in the floor, walls, and furniture.  Most of the woodwork was done by local Amish.  Many of the things you will find in the brewery, either came from the building itself, or from local buildings and businesses from the past.  For example, the bar is an old workbench from a nearby business.  It is complete with the original vice still attached at the end.  The tasting boards were made from original wood that came from the ceiling when it was an IGA grocery store.  Little things like this make Millersburg Brewery a very cool place to visit.

I think one of the best parts of touring breweries, besides the beer, are the stories that accompany each and every one of them.  Millersburg Brewery is no different.  Brewmaster Marty Lindon, took us on a tour of the brewery and shared some neat stories with us in the process.  He took us downstairs, where they do their brewing, and told us that this was originally where the refrigeration was for the old grocery store.  It is also where they stored their food when it was delivered.  There was a ramp down into the basement, and boxes were slid off the truck and down the ramp into the storeroom.  Workers would then have to carry the boxes up to stock the shelves at night.  I don’t think this would be as much fun as brewing beer!!

This basement is now home to all of the brewing equipment Marty uses to make his fine brews.  It is hard to believe that Millersburg Brewing has only been producing beer for just about a year.  Marty started brewing his first batches of beer for the brewery in April of 2013 and started selling beer in May of the same year.  In just one short year, they have already doubled their production capacity, with the addition of new equipment, and have a large number of accounts with bars and restaurants in the Columbus area, southern Ohio, and parts of Northeast Ohio.  Marty let us take a glimpse in the cooler, and there were sixty kegs that were waiting to be loaded and taken away Monday morning to various accounts.

One of Millersburg Brewing’s accounts is The Rail restaurant in Summit Mall and the Belden Village area.  Marty brews a beer exclusively for The Rail that they feature as their house beer.  He also had an IPA sitting in wait at the brewery which he had created for another restaurant account.  We got one of the first tastes of that beer.  It was excellent!!  I’ll let Marty announce this release and where you can find it.

The story of how Marty became the brewmaster at Millersburg Brewing is pretty cool, too.  He started out the same way most brewmasters do in their career.  He was a homebrewer that started with a kit his wife bought him.  The longer Marty brewed at home, the bigger his batches grew.  His time in his wife’s kitchen ended whenever he boiled a batch over and ruined his wife’s stove.  She got a new kitchen and Marty built a garage for brewing.  This is where he learned to perfect his craft.

At the time, Marty was in the banking business.  As his passion for brewing beer increased, he decided to get out of the banking business, and pursue brewing beer as a career.  He ended up working at a brewery in Northeast Ohio and played an important role in transforming that brewery into what it is today.  He eventually got a call from the owners of Millersburg Brewing.  They asked him to be the brewmaster, and the rest is history.  I think they got a very creative, intelligent brewmaster.  Hopefully, when you visit the brewery, you get a chance to talk to Marty.  He’s a neat guy to talk to and full of knowledge.  I enjoyed my time talking to Marty immensely!!

We got to taste each one of the eight brews on tap at Millersburg Brewing.  They were all incredible.  They are all very smooth to drink, but full of flavor.  Marty does a great job at making a beer that isn’t overwhelming to the palate.  My favorite beer was State Route 39 Stout.   All of Marty’s beers are named for a land mark, building, business, or something associated with the Millersburg area.  I thought that was pretty cool.

This trip was a great experience.  I was blown away by Millersburg Brewery.  Millersburg and the surrounding area is already a very cool area to get away for a weekend.  Now, it has a really great brewery with incredible craft beer to enjoy.  If you haven’t ever been to Millersburg, you need to go now!!  If you get an opportunity to try some of Marty’s beers at an establishment near you, don’t pass up the opportunity.  You won’t be disappointed!!

A German-style Schwarzbier (black beer) is a very dark brown to black lager with a mild roasted malt character and a pale brown head. Aromas of slight malt sweetness and faint chocolate overtones come through as it crosses your tongue. The use of Noble Hops is nearly indistinguishable with no bitter taste leaving a moderately dry finish. Black Jacket is very approachable by the craft beer novice trying dark beers and very reminiscent of the German – stlye black lager.

Panther Hollow Barrel Aged is aged in Maple Bourbon barrels from Bissell Maple Farm in Ashtabula County.*A robust porter-style with the addition of vanilla beans. Panther Hollow is rich in chocolate & crystal malts, with a hit of coffee flavor (there is no coffee added). The residual sweetness of this porter is offset by the hops and vanilla. If you like chocolate, vanilla & coffee this is one to try. This is a limited release, when all of its been drank we won’t have it again for another 6+ months!

Aged in Maple Bourbon Barrels from Bissell Maple Farm in Ashtabula County. BCB is an Imperial Stout that has been taken beyond the current definitions in beer judging categories. An intensely-flavored, big, dark ale with roasty malt flavors with deep dark fruit, vanilla and maple flavors with a warming, bittersweet finish. Aromas of roasted grains, maltiness, coffee, dark chocolate hops, and alcohol arouse the senses. The high alcohol content and viscosity is evident in the“legs” when beer is swirled in a glass. Served in 12 oz brandy sniffer.

The second style in our Brewery Series. This version of Boulder is an Amber California Common Style beer. A moderately malty character with a lingering light hop bitterness. This style is an American West Coast original, brewed originally as Steam Beer in the Gold Rush era. Large shallow open fermenters (coolships) were traditionally used to compensate for the absence of refrigeration and to take advantage of the cool ambient temperatures in the San Francisco Bay area. Fermented with a lager yeast, but one that was selected to ferment relatively clean beer at warmer temperatures. Modern versions are based on Anchor Brewing re-launching the style in the 1970’s.

This German-Style Hefeweizen is the characteristically cloudy, straw color wheat beer found throughout Southern Germany and Bavaria. The fruity aroma, tickles your nose and is perceived as citrus, clove and nutmeg with a slight hint of vanilla and banana.  No hop flavor is present in this true to style Hefeweizen.  Very refreshing summer time or for that matter anytime beer. This beer is made with 50 percent wheat malt, German Noble hops and German Yeast. You may like a slice of orange to garnish your summer thirst quencher.  Brewer’s orders are to not serve with an orange unless you request it.

Doc’s‎ pours a light copper color with a slight tan head. Sweet aromas of malt, caramel, and earthy smoke give this a slight fruity character. Clocking in at 9 ABV this Scotch ale has legs to stand on, with a light warming and medium dry finish. The 37 IBU’s are mellowed by the higher finishing gravity of the ale, with little to no hop bitterness detectable in the nose. Light-bodied with smooth alcohol warmth, balances out this wee heavy-style scotch ale.

A blonde ale in the German Kolsch style. It is a pale golden ale with pilsner like qualities.  This ale has a delicate white head with very low bitterness representing a clean, crisp, delicately refreshing tang in the finish. We utilize German Noble hops along with one of the finest Pilsner malts to create our German Kolsch style ale.

Low hopped and refreshing light bodied ale. Pilsner and Munich malts make this easy and smooth on the palate.   Also available in 6 pack cans to go!

Medium body with a deep amber hue carrying hints of caramel and toast with an initial slight sweetness.  Bags Best is a hybrid of an Irish Red Ale and a lightly hopped American Amber Ale.

A robust Porter style with the addition of vanilla beans.  Panther Hollow is rich in chocolate and crystal malts with a hint of coffee flavor (there is no coffee added.) The residual sweetness of this porter is off set by the hops and vanilla, if you like chocolate, vanilla and coffee this one to try.

As you look at your pour of the deep golden ale you will notice the slight hazy hue imparted by the dry hopping. Bringing the glass to your nose, your senses will distinguish the aroma of hops and a slight hint of sweet maltiness. Then as the pale ale crosses your tongue you will feel the slight carbonation bit followed by the taste sensation of the 4 American hops blended to balance out the sweet malt flavors. Finishing nearly dry you will be left wondering if this is a hoppy beer or a malty beer. Don’t think too long about this dilemma before having another sip.

West Coast style IPA with citrus, pine and passion fruit aroma. Taste from over 4# of hops per barrel.