The Story of Westmalle Brewery

The Story of Westmalle Brewery

Westmalle monastery, which is located in the town of Westmalle, Belgium, became a Trappist abbey in 1836.  That same year, abbot Martinus Dom started construction of a small brewery. Later that year, the first Westmalle Trappist beer was served!  Not bad to be a monk, dedicate your life to everything that involves, and get to drink wonderful beer brewed where you live!  Sometimes I feel like I was born in the wrong place at the wrong time.  Actually, I feel like that a lot of the time.  There is so much cool history out there that would have been right up my alley.

After 20 years of only brewing for themselves, the monks decided to occasionally sell very small quanitites of their sweet nectar at the gates of the monastery.  Of course, demand increased, and this resulted in brewery expansions in both  1865 and 1897.  In 1921, the beer from Westmalle was first offered in the general marketplace.  Again, demand increased, and a new brewery hall, yeast room, and workshop were constructed.  Since that time, Westmalle has been a leader in environmental and safety standards, and their beers have been highly influential. 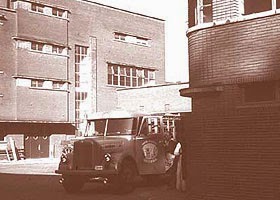 In 1968, a water treatment plant was obtained, long before any law required it, to return water to the environment in a clean state.  This is pretty amazing to me, considering how little thought was given to environmental impact, in general, at the time.  They were way ahead of the curve, and continue today to be a role model in the brewing industry.
Westmalle Brewery beers include only water, barley malt, yeast, hops and sugar.  The water is sourced from a well on the property (what else would you expect?). The yeast is a proprietary strain that is cultured by the brewery (of course), and brings a spicy, floral aroma.  The hops used are whole cone, which is different than most breweries, which use pellets or liquid extract.  The sugar is Belgian candi sugar.  This sugar is fully fermentable and gives the beer a lighter body than one would expect (I agree.  I’m drinking the Dubbel right now, and I was definitely surprised that this beer wasn’t a lot sweeter).  All of these things add up to make a Westmalle taste like only a Westmalle can. 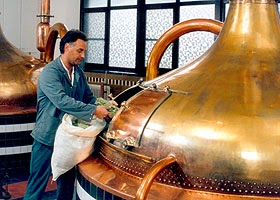 Westmalle produces only three types of beer, and only two are available to the public.  Westmalle Extra is a 4.8% ABV beer brewed just for the monks for lunch time. Again, I think these guys don’t have it too bad.  Westmalle Dubbel is 7% ABV and dark, reddish-brown beer that undergoes a secondary fermentation inside the bottle.  It pours with a creamy head, has a spicy and floral aromas in the glass, and tastes rich and complex, with a fruity flavor and surprisingly bitter finish, which feels dry in the mouth for quite a while.  It’s very different than other Dubbels I have tried.  Westmalle Tripel is a clear, golden beer that also undergoes secondary fermentation in the bottle, and packs a punch (albeit sneaky) with 9.5% ABV.  This beer is fruity to smell, creamy in the mouth, and has a much softer feel to it.  Sometimes referred to as “The Mother of all Tripels,” this beer was first brewed in 1934, and the recipe has stayed almost unchanged since 1956.  I guess when you have been brewing one sensational beer, consistently, for over 50 years, you end up with titles like “The Mother of all Tripels.” 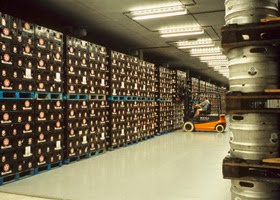 In 2000, Westmalle obtained a new bottling plant, further ensuring the quality of their beer.  The was around the same time the new maturing cellar was complete (pictured to the right).  The underground maturing cellar provides almost ideal conditions for secondary fermentation. And like before, strict attention was paid to the working conditions and environmental impact when the site was built.
In 1998, Brother Thomas, who was the recently retired head brewer of Westmalle, acted as the technical advisor for the revival of brewing at Achel, another Trappist monastery.  Westmalle’s influence can further be felt by the Westmalle yeast he brought with him.  Basically, Westmalle does a few things, and they do those things very well.  I think there is something to be said for that.  We don’t need to get our fingers in everything, and do a lot of things pretty well.  Better to be really good and one thing, and keep life a little simpler.  Westmalle is an excellent example of success in simplicity.
Check out their beers.  They are pretty easily obtained anywhere you can find some specialty beers.  They are good now, they age well when properly stored (mine says best by 06/03/16), and they come in a handy 75 cl bottle size. Perfect for sharing with a friend (or drinking by yourself and writing this article).  Cheers, and enjoy everyone!