This is an interview conducted with Homebrewer Eric Nocerino, of Goleta, CA.

Hi Eric.  Thanks for taking the time to talk with me.  So, how did you start brewing?
I had a few friends that started brewing in high school and that was my first introduction to homebrewing. However, I didn’t start until my college days at the University of New Mexico. It was a “dry” campus and a few of my roommates got around it by brewing beer. They were more than just casual brewers (all grain, mead, cider, ect.) so they really exposed me to a wide range of styles and techniques. There was a great homebrew shop in Albuquerque and the guy that ran it loved to get newbies set-up with equipment and a decent malt extract kit that included grain steeping. I think his idea was that if your first batch turned out good, you’d come back for more. It certainly worked for me.
What’s your favorite part of the brewing process?
One of my favorite parts is putting the recipe together. I typically do very simple malt extract recipes with some steeped grain, but I really like exploring the different combinations of hops, grains, and yeast that can be used for whatever style I am brewing. A long time ago, a friend printed out the entire Cat’s Meow beer recipe website and gave me a copy. I like to look through that and go to other on-line sources to narrow in the style and ingredients. It’s a lot of fun to see the many style variations and then try to make a recipe from those that I think may be good. Again, I’m not doing anything elaborate, just changing up the hops, grains, and yeast in small ways to see what happens. Sometimes a batch turns out tasting like you envisioned and sometimes it doesn’t, but that’s alright. Sometimes a pale ale is just a pale ale and that works for me.
How many batches of beer have you made?
The batch you helped me with was number 45. Since having kids, going back to school, and working my time to brew has certainly decreased. I’m usually inspired to start again when I pick-up a new beer from the liquor store or try something at one of the brew pubs around town that turns out to be really good. My current rekindling of interest comes from a friend moving out of town and selling me all of his ingredients and supplies. 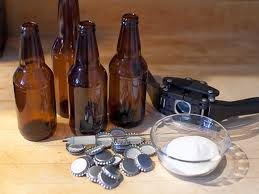 How do you feel about sharing beer you’ve made with others?
It’s funny, when I first started brewing I liked to share, but coveted the better batches. The friends that I learned to brew from in college did the same thing. We were all a little protective of the good stuff. Now, I especially like to share, even the good stuff, since I tend to want to move on to the next batch and try something new. 48-50 bottles is a lot to have on hand and the best way to go through it is to pass it around.
Do you feel it’s difficult to brew?
At first it seemed like a lot of steps were involved, but like anything, after you do it once or twice you develop a rhythm and it goes faster and seems less complicated. Since I typically do basic malt extract recipes with steeped grains and maybe a few added sugars (honey or molasses) or a more complicated hop schedule, I feel that the process isn’t difficult. In general it has always been a fun process with a great outcome.
What’s your advice for people thinking of brewing for the first time?
My advice is to give it a try, especially if you enjoy all types of beer and want to learn about the brewing process. If you don’t know anyone that brews, you can always do an on-line search for your local homebrew club and contact one of their members. From my experience, homebrewers are always very happy to show someone new how to brew. My other advice is to start out simple with a basic kit and ingredients and get a few good batches under your belt before you move on to trying more complex things. As with any hobby, it can be very easy to get carried away with supplies and trying to do more complex styles. 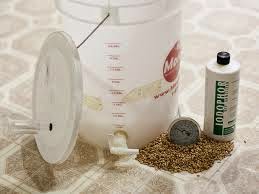 What’s the best beer you’ve made?
This is a tough one. When I was living in Colorado, I had several pilsners and lagers turn out very well. They were close to the traditional German and Czech style examples I had, but with more body and flavor. Very “fresh” tasting. The other one that sticks out in my mind is an ESB that I brewed. It was a kit the local homebrew shop in Denver put together that they must have spent some time perfecting. Consistently very good over three batches, even when I changed out the hops.
What’s your favorite beer?
I think ESB is my favorite style. I tend to default to Redhook ESB although I think the British imports, Fullers for example, have a bit more flavor. There have also been a number of microbrew versions that have been very good as well. Just a bit harder to find. I think ESB’s are a great middle ground between a blonde ale and IPA. It would be great to see more breweries giving it a try. I’m also very fond of Belgian Tripels and Dog Fish Head had one a few years ago (can’t remember the name) that I really enjoyed.
So, have you ever had anything go wrong brewing?
Aside from the occasional low carbonation in a few bottles, I’ve only had major problems with two batches. The first was a hefeweizen that fermented a little too hot. The beer ended up with really strong banana and clove flavors. It was drinkable, but those flavors were just too strong even after bottle conditioning for several months. I had another batch that got infected with wild yeast during bottling. The beer tasted off and the bottles erupted like fountains when opened, so I had to dump the batch down the sink.
Ha.  Well that doesn’t sound like you ever had too bad of a home brewing experience.  Thanks again for talking with me Eric.  I look forward to trying that batch of stout you have fermenting away! 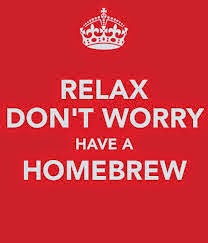