The Craftavore Tales – A Visit to Dogfish Head

The Craftavore Tales – A Visit to Dogfish Head

As I drive down Route 16, traveling east to west across Delaware en route to Milton, the word repeatedly courses through my brain in rhythm with the staccato tapping of rain that’s splattering my windshield.

I’ve been driving for more than three hours now. Not exactly the longest of journeys by anyone’s standards, especially a higher power’s, but the early-summer storm I’ve been plowing my way through makes it feel twice as long. Even my hands have felt its wrath via several slight cuts caused by gripping the steering wheel too tight during a few white knuckle moments. And to me these cuts represent my sacrifice, my very own version of stigmata.

And while I certainly don’t mean to offend, this trip really does feel like a religious experience. Whether it’s the rural Southern Delaware landscape that could easily be mistaken for anywhere in the Bible belt, or the fact that regardless of how many breweries I have visited or will visit, I always knew in the back of my mind that one day I would end up right here. A craft beer calling, if you will. So, as I make that final right hand turn off of Chestnut St. and onto Cannery Village Center Blvd., the final sign that greets me before my craft beer vocation comes to fruition is literally a sign. A large rusted steel oval with the familiar Dogfish Head logo cut into the middle. And it’s only apropos that its snout points to the altar of Sam Calagione. 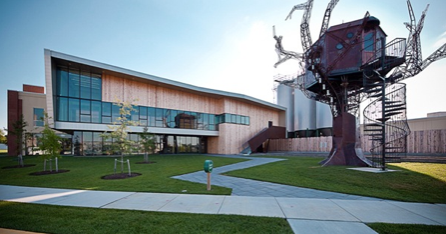 The brewery, in all its stunning architectural glory, feels less like a brewery and more like a college campus. With signs asking patrons for, “A little patience, oh yeah” as the brewery continues its expansion (think Axl Rose here), as well as an on-site store that carries every Dogfish Head tchotchke imaginable, you can’t help but feel you’re at a craft beer institution of higher learning.

This academic atmosphere also extends to the tasting room experience. But not in the way you’re thinking. It’s not stuffy, it’s not pretentious, and, no, it doesn’t even remotely feel like a library. Think small liberal arts college where Timothy Leary would have had no problem holding down an assistant professor gig. The bright and spacious bar area serves as the tasting room team’s lecture hall, and you can’t help but just sit back and listen as they describe each offering’s profile even down to the minutest of brewing details. The passion exuded by one shaggy-haired team member when describing the effects the Paraguayan Palo Santo wood tanks has on the complexity of Palo Santo Marron may only be eclipsed by Walter White’s chemistry speech in the pilot episode of Breaking Bad.

But in contrast to your average classroom lecture or Sunday mass homily, none of their pontification feels preachy. It’s an inclusive experience where your reactions or thoughts on a particular beer’s flavor, texture or aroma are welcomed and encouraged.

And while this type of in-depth discourse about beer may seem over the top to some, that very idea of challenging your thinking about what beer is and could be, was, and still is, the ethos of Dogfish Head ever since the doors opened at the original brewpub in Rehoboth Beach back in 1995. Since then, Sam Calagione has become the Godfather of the “extreme beer” movement. A moniker that seemed novel back in 2004 when Dogfish Head sponsored Beer Advocate’s 1st Extreme Beer Festival, but in 2014 it can be used to describe, well, mostly all craft beer. And while that may come across as a knock, it’s not. It’s actually a compliment.

Without Dogfish Head, and their quest to make uniquely inspired beers without traditional boundaries during a time where such a thing was considered unthinkable, the current craft beer industry simply doesn’t exist. No Double or Triple IPA’s with ABV’s north of 10%. No barrel aging programs utilizing vessels that previously held bourbon, rum or wine. You could even argue that the beer & food pairing craze may not have developed as it did without Dogfish Head’s culinary-inspired beers leading the way in the early days.

Sam Calagione and Dogfish Head is all these things for me from a craft beer perspective. Which is why I made my pilgrimage here and why I urge you to make yours. Maybe it’s Ken Grossman and Sierra Nevada, or Fritz Maytag and Anchor Brewing, or even Vinnie Cirlurzo and Russian River Brewing Company. Where ever it is, no matter how short or far the journey, just go.

Your craft beer calling awaits you.

Midas Touch (Herbed/Spiced Beer, 9.0% ABV) – The first of Dogfish Head’s Ancient Ales series, Midas Touch is brewed with ingredients found in 2,700-year-old drinking vessels from the tomb of King Midas.Huge honey notes permeate your nose the moment you raise your glass. Super perfumey and sweet to the taste. Dogfish describes this beer as somewhere between wine and mead and that description is spot on. While this wouldn’t be a regular beer for me, it would be a perfect complement to a spicy Asian or Indian dish. And since I’m a huge fan of anything curry, I walked out of the brewery with a 4-pack of it with the goal of cellaring it for the next time I order out for some Tikka Masala or Rogan Josh. Instead, I drank the entire 4-pack the next day.

Festina Peche (Berliner Weisse, 4.5% ABV) – Outside of Session IPA’s, Berliners might be the hottest style in craft beer right now. Citrusy, tart and refreshing, the style screams summer and Festina Peche is one of the best examples of the style out right now. Not going to lie, Peekskill Brewery’s Simply Sour is still my absolute favorite Berliner, but Festina is a fantastic number two. In typical Dogfish style, they go the extra mile and add peaches which really amplifies the tartness. It’s also super dry and clean which makes it so incredibly drinkable.

120 Minute IPA (Imperial IPA, 15-18% ABV) – The one, the only, the legendary 120 Minute IPA was the beer I was most looking forward to having on this trip. I’ve had it several times before, most recently at EBF, but there was just something about having it at the brewery that got me excited. And the massively hopped, sweet and boozy behemoth did not disappoint.

Burton Baton (Imperial IPA, 10% ABV) – Basically two beers mixed into one, Burton Baton is the melding of one batch English Old Ale and one batch Imperial IPA which is then blended and aged in oak tanks for a month. The result is a bready, biscuity and creamy malt forward beer with hints of both pine and oak in the finish. If you’ve read my previous reviews, you’ll know that I’m not one for English-style, malt heavy beers, but Burton Baton is different as the oak and alcohol presence helps to add both depth and complexity. A big beer at 10% that doesn’t hide it’s alcohol at all, this would be a welcome addition to a frosty winter night.

Firefly Ale (English-Style Pale Ale, 5.0% ABV) – Brewed for the Firefly Music Festival, which is quickly becoming the East Coast’s Coachella, Firefly Ale is a simple sessionable pale ale that’s crisp and just slightly bitter. It’s easy to see why this beer is brewed for a mass music festival as it’s probably the most approachable beer Dogfish Head has ever made. While serious craft beer geeks may find this brew a bit underwhelming, I don’t think anyone would be upset enjoying it while watching some of the best bands in the world tear up the stage.

Rosabi (Imperial Pale Ale brewed with Wasabi, 8.0% ABV) – Brewed with musician Julianna Barwick, Rosabi is a perfect example of Dogfish’s ethos of stepping outside of the brewing box. While some may chide their continuation of collaborating with artists as nothing more than a marketing gimmick, the measuring stick for me will always be the quality of the beer. And as a sampler of several wasabi beers in the past, some good, some not so good, Dogfish had their work cut out for them to win me over. In the end, they pretty much did. Rosabi has a nice solid amber, if not red ale, appearance with citrusy notes upfront which quickly turns into a mild wasabi flavor in the throat. Definitely not overpowering or spicy, yet you’d be hard pressed to fine me drinking more than a taster or maybe 8oz. of this beer at any given time.

Raison D’Etre (Belgian Strong Ale, 8% ABV) – A Belgian-style brown ale brewed with beet sugar and raisons, Raison is a complex beer that’s all raisins and alcohol in the nose then settles into a mix of roasted sweet malts, caramel and dark fruits in the mouth. Bready and somewhat silky, Raison almost becomes wine like as you progress through your glass. Beyond glad I had the opportunity to try it, however, I don’t think it would be a beer I’d go out of my way to seek out again.

Brewed for Naught (Saison, 5% ABV) – A brewpub exclusive, Brewed for Naught is a saison brewed with Citra and thyme. The straw colored brew hits your taste buds fast with an abundance of tropical fruit all the while filling your nose with the aroma of thyme. Perfect for summer and extremely refreshing, the beer is what the profile says it is. Sessionable? Sure, to a degree. However, like many of Dogfish’s off-centered ales that contain culinary ingredients, a few and you’ve probably had your fill.

Blood Moon (American Strong Ale, 8.50% ABV) – Another limited release which I believe is only available at the brewpub, Blood Moon is a collaboration with Tom Peters of Monk’s Café fame in Philadelphia, PA. And for me, this beer was the best of the bunch at the brewpub that day. Wood fire smoky, this strong ale has some serious grilled meats like flavor brought out by the Fuji Apple Wood smoked malts. I’ve said it before in previous reviews, smoked beers not for everyone. But nearly all I’ve tried definitely are for me. Pairing this with a freshly charcoal grilled skirt steak or rib eye just might be my version of Nirvana.